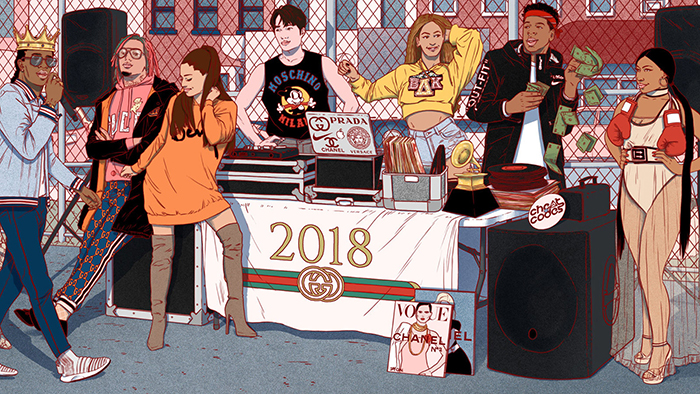 Some of the world’s top agencies pick the ones to watch for the year ahead – acquaint yourself now with the artists whose work will define 2019.

2019 has started, everyone’s officially back at work – including artists – and the time is here to start looking at trends for the year ahead. While we always cover new releases of tools to make creative life easier, we’re also just as keen to find the future talents of tomorrow, those as of now little known names who are making great use of said tools.

Like every year we’ve reached out to agencies both boutique and established to shed a light on up and coming illustrations working in a variety of fields, ranging from painterly works to vectors to paper craft. Helping us with our list this year we have JSR – who exclusively announce a brand new signing below for Digital Arts – along with Heart, Colagene, Grand Matter, Folio Art, Jelly, and Agent Pekka. A lot of big names then, giving us a lot of future big names for this last year of the 2010s – find out more about each artist and see some of their best works below.

New signing Aart-Jan Venema lives and works in The Hague, where he uses digital and traditional painting techniques to create multi-layered and fantastically coloured illustrations, as anchored with a strong compositional eye. Aart likes to fill his illustrations with stories, surprises and details for the viewer to find, reminiscent of Hieronymous Bosch, one of his favourite painters.

The winner of both the Overall Professional and Design awards at the World Illustration Awards 2017 for work which we highlighted here, Aart’s diverse portfolio has led him to work with clients such as Google, The New Yorker, ZEIT magazine, Douwe Egberts, The New York Times, Wall Street Journal, and Green Man Festival. Aart recently completed his first picture book Night Windows with Cicada Books, too.

When he’s not illustrating – which is quite rare – you’ll find Aart surfing, playing board games, watching Twin Peaks or reading Murakami.

Luke Waller has been working as a visual storyteller for a number of years, illustrating regularly for clients including The Financial Times and BBC History, as well as Twitter, Philadelphia and Playstation. In the past year, Luke has been exploring the cinematic quality of his work more deeply, adapting his signature hand-drawn style and colour palette to animation.

His animation below uses a Hong Kong visual aesthetic, more specifically what’s known as the Wuxia martial arts film, to highlight the need for a change in men’s attitudes towards sexual harassment, drawing parallels between this ancient time and modern stories of harassment and abuse.

Luke’s distinctive animation style is charged with a strong sense of human connection, emotion and exceptional storytelling, that lends itself to a wide range of subjects.

Victoria Bee was born and raised in Belgium. After five years of studies in computer graphics and four as a junior art director and paper artist between Montreal, Paris and London, she became an independent artist and moved to Berlin in 2015.

Her visuals are inspired by surrealism and are always very colourful. She is specialised in creating under or oversized accessories, 3D (tangible) illustrations and set design. Her services range from conception to production, photography and post-production.

Victoria Bee was born and raised in Belgium. After five years of studies in computer graphics and four as a junior art director and paper artist between Montreal, Paris and London, she became an independent artist and moved to Berlin in 2015.

Her visuals are inspired by surrealism and are always very colourful. She is specialised in creating under or oversized accessories, 3D (tangible) illustrations and set design. Her services range from conception to production, photography and post-production.

Sarah is an American illustrator who travelled to Paris for her studies. Her work ranges from fashion illustration to animated GIFs and panelled editorials. The best way to describe her work would be: nostalgia, tenderness, femininity, and 80’s electronic music. Clients include Adidas, BBC Three, Playboy and Huffington Post (for whom she drew some brilliant illustrations in December).

Sarah is an American illustrator who travelled to Paris for her studies. Her work ranges from fashion illustration to animated GIFs and panelled editorials. The best way to describe her work would be: nostalgia, tenderness, femininity, and 80’s electronic music. Clients include Adidas, BBC Three, Playboy and Huffington Post (for whom she drew some brilliant illustrations in December).

Jason was born in Seoul, South Korea and grew up in the US. After graduating, he took a six year adventure around the world whilst freelancing, living in Beijing, Tokyo, Seoul, Barcelona, London and Paris.

He’s now back in NYC, drawing at his desk and building a substantial client list including The Smithsonian and Nike.

Alva Skog is an illustrator from Stockholm, Sweden who expresses and questions ideas and ideals such as gender inequality and hidden racism through her illustration work.

After graduating from Central Saint Martins in 2018, Alva joined the Jelly Futures scheme and has already worked with notable clients such as The Guardian, Apple and London retail zone Coal Drops Yard (to name a few). Digital Arts first came across her at last year’s CSM grad show and will no doubt keep following her work in the year ahead.

Tom Guillmard signed with Jelly towards the end of 2018 onto their Futures scheme, which finds the best fresh talent from all sources, offering them a route to a commercial art career.

Since graduating from Camberwell College of Arts Tom has created illustrations for various design studios, publications and brands such as PULL&BEAR, The Rolling Home and NEON magazine and his work has been awarded a D&AD pencil.

We first featured Montreal-based Polish illustrator Justyna Stasik last summer when her animation was part of a Punanimation showcase highlighting women, trans and non-binary creators. Justyna’s character-driven works are utterly charming, full of quirky little details and oddities. At the same time they’re very approachable and work well in a variety of applications.

Whooli Chen works with a delicate palette and sensitive painterly layers that takes whimsical illustration to another realm.

Currently based in Taiwan, Whooli studied an MA degree in illustration at the University of the Arts London, where she found a muse in an urban street fox. The editorial world is speckled with her charm with multiple covers for Little White Lies magazine amongst others. She loves literature and art and can often be found with a writing pen alongside her drawing board.

WRK creates colourful and boldly visual imagery for a variety of editorial and commercial projects. The duo favour a playful, unconventional and charming approach working with a wide range of materials including paper or papier maché, and enjoy experimenting with everyday materials.

George had a brilliant 2018, securing regular columns with Bloomberg Businessweek and Der Spiegel as well as working on commissions for Burberry and Penguin Random House to name a few.

With more high profile projects currently in the pipeline, Heart are sure that 2019 will be another exciting year for George. See our handpicked selection of his work along with a chat with George here.

2018 was also a great year for Barry Falls. Alongside his editorial work for international clients, he worked on a large campaign for Brand USA, was commissioned for a book gifted to the Pope (!) and ended the year with a project for American Express.

2019 will see his first children’s book It’s Your World Now published by Pavilion as well as a collaboration with Laurence King Publishing.

His work takes the form of flat illustration for print and digital applications, as well as physical 3D installation and sculpture. He has worked with clients such as WeTransfer, the British Museum and Wolff Olins.

Grand Matter have chosen Thomas Hedger as he is consistently experimenting and pushing boundaries with his work. Having graduated from Central St Martins last summer – whose work for which we featured last year in our CSM grad show highlights – he has already embarked on an MA at the RCA, and his hunger to learn and develop is really exciting. The agency has a feeling he hasn’t even scratched the surface in terms of his creative expression. Definitely one to keep an eye on – see more for yourself on Thomas’s Instagram, and see our slideshow selection of his best work.

Jessica is a textile artist and model maker specialising in creating tactile, handcrafted models and props. Her playful take on everyday items, intricately crafted in lambswool, are instantly recognisable and much in demand by fashion and media brands such as Tatler, Stylist, Liberty, Creative Review and ITV. Jessica knits all of her woolly creations on her vintage domestic knitting machine and sculpts the foundations of the models by hand in her studio.

GM have chosen Jessica Dance as another tip for 2019 as she is the queen of all things textiles and is constantly honing her craft. Last year Jessica started experimenting with typographic embroidery, and this development has introduced a bold graphic dimension to her work and it should be exciting to see how it evolves as she weaves it into her existing practice. Watch this evolution for yourself on Jessica’s Instagram.

Hunky Dunky are a new signing to the Bernstein & Andriulli roster, made up of 3D Artist Yonito Tanu and Art Director Jessica Chapiness. The duo create beautifully surreal still or animated worlds that are full of colour and unexpected details and movements.

This article is written by By Giacomo Lee.

The all images are collected from here.